The kick-off towards the countdown for the 20th edition of the Malaysia Games (SUKMA XX) began with a bang with the unveiling of its logo and mascot. The state of Johor will be hosting this biennial event for the second time since its inauguration in 1986. Johor first hosted SUKMA fourth edition in 1992.

Officiating the logo and mascot unveiling ceremony, Menteri Besar Johor Datuk Dr. Sahruddin Jamal is confident all Malaysians will experience the hype of SUKMA XX as it inches closer. The promise of a sporting spectacle will be upon us when the games begin on 11th July 2020.

During ceremony, Jimi the Tiger was unveiled as the official SUKMA XX mascot symbolising the state’s long-standing Southern Tigers tradition. Portraying a fierce and brave character, Jimi truly represents the Johor identity with ancient Sultanate symbols of palms while sporting a modern fashioned tracksuit for a friendly, sporty and fun approach.

The SUKMA XX logo was also introduced featuring the Jawi alphabet “Jim” which represents Johor as the host where this respective form of writing is still practiced today. Part of the logo also resembles the global sports symbol of a torch.

The placement of the SUKMA XX slogan, “Semarak Juara” (The Glory of Champions) at the bottom of the logo denoting the call of taking on the challenge to empower sports and celebrating sportsmanship.

Kumpulan Prasarana Rakyat Johor Sdn Bhd (KPRJ) through its subsidiary company, Sports Johor Sdn Bhd (SJSB) will act as the secretariat for SUKMA XX having the expertise and experience of being the catalyst for all sports and athlete development programmes in the state.

According to CEO of SUKMA XX Johor 2020, Haji ‘On bin Jabbar, “KPRJ and SJSB are always supportive towards the organisation of sporting events in johor. These efforts are to empower sports as an industry which can change lifestyles and unite the Johor community towards a more holistic sports growth in 2030.”

The MB had mentioned in his speech that an estimated amount of RM425 million was the total cost of sports infrastructure development and refurbishment works conducted at the 11 venues of SUKMA that focused within three districts; Johor Bahru, Muar, and Kota Tinggi.

38 fully equipped sporting venues around Johor will be utilised for 30 disciplines which will be contested by the 14 states and Brunei involving 11,000 athletes when the Games official open its doors next year. 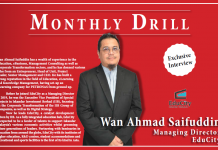 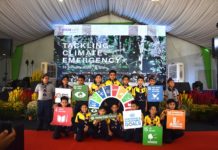