Dato’ Osman Sapian said in a press conference that the state government has already fulfilled 85% of its election manifesto while the remaining 15% is still under discussion and will be carried out within the 100 days period.

The State government is currently providing incentives of RM500 and RM1000 to diploma and undergraduate students respectively.
The Menteri Besar’s term has also been limited to two terms.

Osman also claimed that previously, there was mismanagement in terms of affordable housing quota where it was given on political basis, but now the state is working on equally distributing the affordable homes.

Moreover, the state is also planning to give out a health card worth RM500 to those from the B40 segment which will benefit almost 360,000 citizens.

A new logo and motto is also expected to be announced shortly. Plan 2019-2030 (Johor Bestari, Johor Berprestasi Tinggi) which comprises 8 key thrusts is said to serve as the guideline for the state’s next year budget. 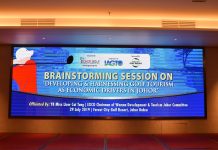 Country Garden Races Ahead With Record High On Fortune Global 500...