Crescendo HELP International School had their Book Week recently with a range of exciting activities, from house writing competition to Bedtime Stories where students returned in the evening wearing pajamas, to book character dress-up day and meeting me.

With an aim to inspire their students to love reading and writing, I was invited to participate with the school to kick-start the week of activities.

Event coordinator, Tammy Cyngier, wrote me with a proposed itinerary of activities and suggested that my presentation should include an introduction of myself, my inspiration and the amazing journey to the success of my book, My Johor Stories: True Tales, Real People, Rich Heritage.

Held in the auditorium, this presentation was for some 310 students and about 30 staff during the school’s morning assembly. I was also asked to do a book reading session with 50 Year Six students in the school library.

All this sounded very exciting as this assembly would be my largest audience thus far.

While preparing my presentation for this international school, I took into consideration, the students’ ages and cultural mix which was not only widely ranged but also made up of foreign nationalities.

Unlike local audiences, they might not have background knowledge of Johor culture and heritage so I adjusted the contents of my presentation and ensured that they could grasp what I shared with them.

On the appointed day, it felt like I was going back to school because I should be on time for assembly!

I was welcomed on arrival by a team of Student Leaders and Student Council members, aged between 16 and 17, and ushered into a waiting room.

Over tea with Principal Philip Brisley and these students, he encouraged the teenagers to chat with me as an opportunity to develop their social skills with a visitor.

Later at the auditorium, I watched as students came in and sat down on the floor while the teaching staff sat on chairs that lined the rear wall.

A trophy and medals were on the table and the principal explained that their weekly assembly was also a time to recognise the students’ recent achievements in the presence of the staff and students.

And then it was my turn to address the audience.

Using some old photographs published in my book, I introduced myself and my family and shared with them a little about my school-going years and where I grew up.

I also introduced our grandparents and explained how my siblings, cousins and I lived with them so that we could go to school more conveniently.

Earlier on in the assembly, the principal acknowledged the achievement of a student who excelled in badminton so it was easy to connect the audience to that game.

Next I showed a photograph of our grandparents and Uncle Billy with the Thomas Cup, used in my story, “Where champions were born.”

I pointed out that both my grandfather and grandmother enjoyed playing badminton, and grandfather – a four-time Johor state champion in the 1930s – had trained champions.

My grandmother was featured in a separate story, “The Real Champion” as she was the mother of badminton champions and passed away at the ripe old age of 103.

I mentioned that one of the sports achievements by my mother’s youngest sister, Aunty Sylvia, as the first and only Asian woman to win a Commonwealth Singles Gold, was a record that remains unbroken to this day.

[Later I met History teacher Paul Blake in the canteen, who said he borrowed a photo of Aunty Sylvia (from the internet!) on her 1978 triumphal win at the Commonwealth Games, to explain the Commonwealth concept which he was then teaching his class.]

I also shared with the students that while I lived with my grandparents, I learnt a great deal from them. Looking back, this knowledge that I accumulated helped to flesh out my stories when I wrote about Johor personalities, its culture and wealth of heritage.

Then I had the pleasure to autograph my books for students and teachers who wanted to present my book as gifts to their mothers and families not just here but also in South Africa, Australia, Sri Lanka, UK and USA!

Then it was time for my reading session in the library. I arrived to see 50 Year Six youngsters, arranging themselves comfortably on beanbags, ready to listen to me reading excerpts from my book.

I invited these lively 12-year olds to raise their hands if they had questions and I had no trouble answering their cute queries.

The session went on smoothly as I kept the youngsters engaged by interacting with them and giving relevant illustrations to help them understand what I was reading.

“I wish there was a longer period for the assembly so I could hear even more,” commented Student Leader-Deputy Head Girl, Ng Zhi Yun, after my presentation.

Student Leader-Deputy Head Boy, Satoshi Omata, added that even though he may not be a writer, he was inspired and felt ready to share his own experience with future generations because he survived the horrific earthquake and tsunami in 2011.

“You are doing something so invaluable: bringing together generations with your stories and in the case of our students, stirring within their hearts an appreciation and love for the older folks – their parents and grandparents,” said Deputy Principal – Pastoral Care, Tan Seow Heng.

Finally, Principal Brisley succinctly summed it up: “It’s the recording of the impact of events and developments that allows us to grow and benefit from the past. Your accounts of people, places and society, will carry future generations forward…”

A week later, Tan told me that she gave the Year Nine and Year 10 students an assignment to write in their journal on the topic, “My Thoughts on Book Week” and it was interesting that most of them wrote about me! 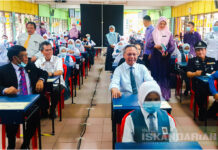 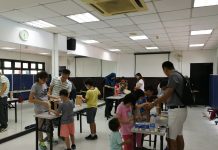 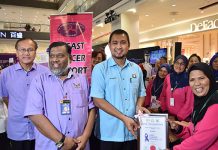 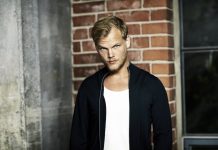 What do Singaporeans buy in JB? – Part One