Some wounds and afflictions are not visible to the naked eye

In conjunction with World Mental Health Day and World Suicide Prevention Day, Monash University Malaysia (Monash) and the Jeffrey Cheah School of Medicine & Health Sciences hosted a seminar followed by workshops to provide a platform for everyone in the Mental Health Community to learn new skills and network with their peers in the same field.

“We need to improve on our emotional vocabulary,” quipped Paul K Jambunathan, Senior Lecturer of Psychology in Monash as he went through the basis of learning to love ourselves. Paul, who also conducts the afternoon workshop “Applied Positive Psychology” explained that by expanding our emotional vocabulary can we express what it is that ails us to the people that wants to help us. He explained that family comes down to 3 interrelating parts that are family structure, family function and family life cycle but with break-neck speed of technological progress, some people unhealthily view social media as their family.

“Voice out: The Art of Healing” occurred at Monash’s Clinical School campus in Johor Bahru and featured guest speakers Prof Dr Philip George from The Mind Faculty and Dr Peter Norrie from Australia to touch upon the facts of whether Malaysia and other Asian countries were doing enough in regards to allocating funding and personnel to the mental health field while drawing parallels to the western world that has seen an increase in the concern and welfare of citizens outside of physical ailments. With the World Health Organisation (WHO) officially recognising burnout as a contributing factor to deteriorating mental health and the rising rate of suicides in Malaysia, the speaker duo also highlighted the importance of socio-political factors that affect diagnosing or treating mental health issues.

Apart from the seminars, there were several other workshops held such as “The Art of Joyful Clowning” – a class organised by the Johor Bahru Happy & Joyous club and led by the ever happy Lee Jean who is a pharmacist by profession seeking to infect others with their energy and passion regarding spreading joy and happiness with activities such as laughter yoga and clowning. This is an approach adopted from American physician Patch Adams to bring humour and comfort to those who need it that they were privileged to have volunteered with.

Another popular workshop held was “Personalising yourself to Interpersonal Psychotherapy (IPT)” led by Dr Cindy Niap and Dr Albert Lee where they outlined the differences between mental health issues and psychiatric illness along with the 3 main approaches to treat them – namely, with pharmacology, physical therapies such as electric current therapy and non-pharmacological methods such as psychotherapy which the course covered. Amongst the attendees were counsellors, college lecturers, drug rehab workers, students and a kindergarten teacher. In our lives that are swamped by financial and social obligations, don’t dismiss the notion of taking care of the mental health of yourself and the people around you. 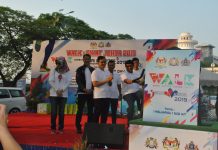